Get me outta here!

I originally planned to title this post “3 BIG Ways that WWC Helped My Career in 2016” to highlight all the ways that Women Who Code have helped me. But I wanted to speak in a larger sense of the struggles of women in technology and how I want to help, hence the current title. I’m still sending lots of love to WWC throughout this article though! 🙂

2016 has been an incredible year, full of adventures including a trip to Beijing, China and also full of challenges, in particular my quest to get a full-time job.

I’m a long-time software engineer and have worked on many different types of software applications, including cross-platform mobile applications built in Titanium. For the most part, my best opportunities in Titanium mobile development laid in freelance contract work, which I no longer wanted to do. Yearning for some stability in my employment and to get out of the constant cycle of looking for work, which is the life of the freelancer, I decided to learn native iOS development in 2016 and find employment as a native iOS developer. It proved to be a trying year.

You’ve probably read all the grim statistics about women being under-represented in technology, so I won’t bore you with more. I definitely felt like I was facing unconscious bias in my interviews, and what I call “checklist syndrome”. Checklist syndrome is when a recruiter won’t give you a chance unless you check all the boxes, even if you have skills that don’t necessarily check off a box, but are totally transferrable.

And I had been not only a mobile developer, but a software engineer for many years, so I already had experience in C++ (a transferrable skill to Objective-C) for example, and surely I can learn! Despite all this, my transferrable skills and experience; and my many github repos, personal projects, and published mobile apps in the market, no one would hire me. Some recruiters tried to dismiss me before I could get to the first interview. I felt like I was starting over in my career.

Although I have been a member of my local Boulder/Denver Women Who Code (WWC) meetup for years, 2016 was when I decided to become more involved. That decision turned my life around. Here are 3 big ways that Women Who Code helped my career in 2016, and why I’ve decided to make 2017 the year of giving back to women in tech:

1) Women Who Code provided scholarships for me to attend conferences.

I signed up for the Women Who Code email newsletter and would get weekly notices on scholarships to various events, such as conferences. Through these scholarship applications, I was able to attend LambdaConf to learn about functional programming, and the try!Swift conference to learn more about iOS programming in Swift. These conferences also provided me with great opportunities to network, and to meet some amazing people! 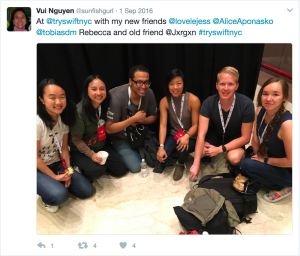 Making friends at try!Swift conference, with my mentor Basel to my left

2) I met my mentor at a Women Who Code meetup.

Basel Farag gave a presentation on Swift at my local WWC meetup, and as I was learning native iOS development, I attended. From my first meeting with Basel, I knew right away that he was an ally for women in technology. At the time, Basel was the organizer of a local iOS Swift meetup and so I asked how I could help. Before I knew it, I was giving a presentation at Basel’s next Swift meetup!

Basel ended up being my mentor and advocate, and he referred me for an iOS Developer position to support the New York Public Library, a job that I’m starting at next week! 🙂

3) A Women Who Code hardware hackathon got me started on the Internet of Things.

So, what is it about this trip to Beijing, China, and how exactly was WWC involved, you ask? That’s a good question!

My local WWC meetup hosted a women’s hardware hackathon in February 2016, where my team and I built a light sensor project for my turtles’ aquarium.

My team at the WWC hardware hackathon

From then on, I was bit by the “IoT bug”, so to speak. So, when the Intel IoT Roadshow came to Denver in April of 2016, I competed in that one as well, helping my team win 1st place for our automated faucet dripping system that prevents water pipes from freezing and breaking in cold temperatures.

Since we did so well in the Roadshow, we entered our “Save the Water Pipes!” project online for a chance to compete in the China-US Young Maker Competition. My team was selected as one of the semi-finalists and Intel flew us, all expenses paid, to Beijing, China to compete in the final round of competition, where as the team lead and software architect, I led us to an 11th place finish out of 64 teams!

“Save the Water Pipes!” system in Beijing, China

Intel Edison board powering everything

Outside of the competitions, I gave presentations on “Save the Water Pipes!” and on my own personal IoT projects at local meetups. From my work in IoT and promoting Intel technologies, Intel recognized my expertise by making me an Intel Software Innovator, which is a volunteer technology evangelist.

Presenting on “Save the Water Pipes!” at Intel conference

And to think, all of this started from me attending a hackathon hosted by my local WWC chapter! 🙂

Because of the incredible opportunities I’ve experienced as a result of WWC, I started giving back. I gave a presentation about my IoT projects at my local Boulder/Denver WWC meetup.

Other ways I’m giving back: writing congratulatory postcards to women who’ve been accepted to my alma mater, Colorado School of Mines; and I hope to teach an iOS Swift workshop at a women in tech meetup later this year (I’ll announce which meetup and when in another blog post once this becomes official!)

Thanks again to WWC for all that you’ve done to help my career in 2016, 2017, and beyond! I hope 2017 will be the year that I can continue to give back to WWC and to the cause of gender diversity in tech. Because of WWC and organizations like it, I will never feel alone again in my career!

Leave a Reply. Note that comments are moderated on this blog. Cancel reply

This site uses Akismet to reduce spam. Learn how your comment data is processed.