Get me outta here!

360iDev is an iOS Developer conference that takes place in Denver, CO every August. I’ve been fortunate to attend 360iDev several different ways over the years, including as a speaker in 2018. But this is the first time I’ve attended as a volunteer, and discovered that it comes with benefits you don’t get from just being a regular attendee. Let me share with you what those benefits were, along with some pro tips, and maybe you’ll decide to volunteer at your next tech conference!

That’s the first benefit of volunteering for 360iDev! If you’re not currently working for a company that can sponsor your admission ticket, then volunteering can be a viable means of getting the skills and networking in for your career.

The work isn’t difficult, but it’s important and much needed for a successful conference. 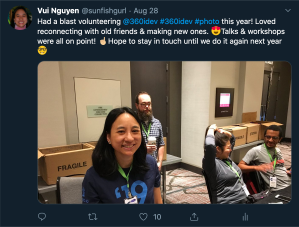 Your tasks will be to record talks, staff the registration desk, and create swag bags for the speakers and attendees.

Recording the talks is especially important, as that is one of the best benefits / values of attending 360iDev — getting early access to those recorded talks before they become publicly available. Just showing up is the most important trait. Come to think of it, that’s true of most jobs, actually. 🙂

Oh, and you get to hold up signs letting the speakers know when they have 10 minutes, 5 minutes, or no time left for their talk, to help them pace themselves so they don’t go over their time slot. 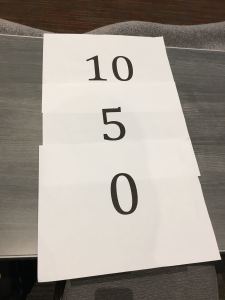 Getting involved beyond attendance is especially helpful for introverts.

If you’re a regular reader of my blog, you know by now that I’m an introvert. And if you’re an introvert yourself, you know how exhausting it can be to come up to strangers all day and make small talk. Well, what if you had a built-in excuse to talk to folks? That’s another benefit of volunteering.

From chatting people up while you check them in at the registration desk, to assisting speakers while you set them up to record their talks, there’s plenty of opportunity to talk to people — no awkward small talk necessary!

You get access to exclusive speaker / sponsor events, which helps with networking. 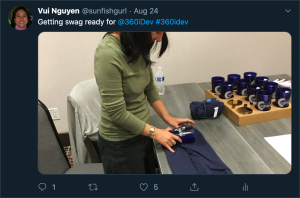 Here’s another perk to volunteering: you get to attend the speaker & sponsor dinner and eat the continental breakfasts with the “All In” attendees.

This is nice, because then you can meet the speakers and sponsors in a smaller setting (there’s a lot of them and it’s in a big room, but I mean, compared with trying to meet everyone at the conference at the same time — all 250+ people — that’s a lot!). For 360iDev, there’s a special “All In” ticket you can buy, which includes continental breakfast. Not everyone gets the “All In” ticket, so then you have a chance to have even more one-on-one and smaller group convos with folks at breakfast, including many of the sponsors, who seem to like the “All In” package. 🙂

If you record talks for a living, use some industrial strength software. 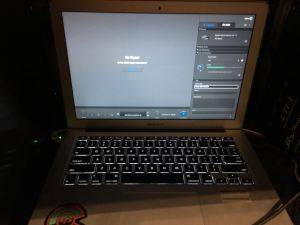 About to Record Next Talk

Only the slides and audio are recorded for the talks, no video of the actual speaker is recorded. But if you also want good editing capabilities, and you end up editing a LOT of videos every year for a conference, it may be worth the splurge. For 360iDev, the organizers purchased Elgato Game Capture. Fortunately, the volunteers don’t have to do any video editing.

But what about using QuickTime to record and iMovie for editing, you say? Those are free on the Mac. Sure, but if I had to do a bunch of these, I might rather poke my eye out than use iMovie! Sorry. Anyway, thought you’d like to know. 😉

You get to meet the speakers’ dogs. 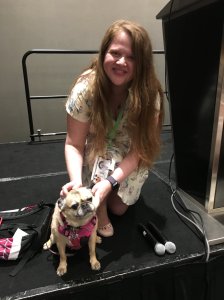 Janie Larson with her dog

I had the opportunity to record Janie Larson‘s “Think Different” talk addressing misconceptions about people on the autism spectrum. Prior to her talk, I also got to meet her support dog, who was a very good girl!

It is better to be present when you show up than to run yourself ragged doing everything. Practice self-care!

When you volunteer, you have to show up early for the registration desk, at least for the first couple of days (you know, to make sure you’re actually there when people check in). There’s also some activities that can go on late into the night — like if you want to partake in the beer garden AND do the karaoke later that night. Now, I don’t want to tell you how to live your life … who am I kidding? Of course I am, that’s why I’m writing this blog post! 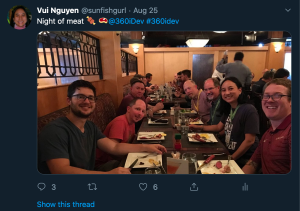 Can’t Miss the Night of Meat tho!

Listen, you don’t have to do all the activities. It’s important to network, sure, but it’s also important to be present when you show up. So if you’re exhausted because you have to show up early to staff the registration desk and are recording talks all day and partying all night, maybe give yourself a break one evening and call it a night early. Or, give yourself breaks during the day when you don’t have to record a talk. All I’m saying is, practice self-care and strike a healthy balance.

Do not record a talk right before lunch AND another talk right after lunch – you won’t have time to eat.

Along the lines of self-care, do not do the above!

So, the first day of 360iDev is workshop day, which are hands-on workshops, and the rest of the conference days after that feature more traditional talks. On workshop day, all the volunteers get together and select the talks we want to record, in a round robin fashion.

Since lunches are not catered at 360iDev, unlike many other conferences (which I think is a good thing), that means you get to walk to a local restaurant, or a park full of food trucks, and get lunch with your conference lunch vouchers. That means getting lunch can take a little while, so maybe record a talk before lunch or after lunch, but don’t do both on the same day. (There is a designated lunch time when no talks are happening, but because you can use the lunch voucher at anytime, you’re welcome to grab lunch early or come back a little later. )There are enough volunteers to cover recording all the talks, so please make sure to give yourself enough time to eat!

It is fulfilling to record the talk for a speaker you’ve been mentoring.

Some former volunteers have become speakers in past years. For me, I was a speaker last year and found that my experience as a speaker gave me another way to give back, as a volunteer. 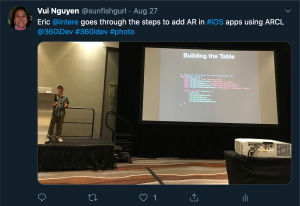 Eric Internicola gave a talk on ARCL (“Build Immersive Experiences with ARKit and CoreLocation”), a library that combines ARKit and Core Location to integrate augmented reality into iOS apps. During the CFP (call for papers) Process, I had the opportunity to give him some advice on his talk proposal, which was accepted. (Full Disclosure: I was not, and never was, on the CFP committee, and the CFP process initially removes names, so his talk being accepted was all on him.) In addition, I encouraged him to give a run through of his talk at a local meetup, which he also did. By the time he delivered his presentation at 360iDev, he was polished and ready to go! And it was a pleasure for me to be the one to record his talk, and be a part of his speaking journey at 360iDev.

Leave a Reply. Note that comments are moderated on this blog. Cancel reply

This site uses Akismet to reduce spam. Learn how your comment data is processed.